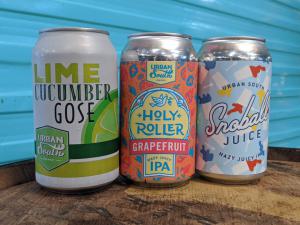 NEW ORLEANS, LOUISIANA, USA, January 13, 2020 /EINPresswire.com/ — In a city defined by its rich culture of celebrations, New Orleans understands there is no such thing as too much of a good thing. That’s why the city’s largest craft brewery, Urban South Brewery, is kicking off 2020 with the release of several fan-favorite beers and participating in various major community events.

“The beers we produce throughout the year celebrate what Urban South Brewery is all about: bringing bold, innovative flavors to traditional beer styles that people love to drink,” said Urban South Brewery founder, Jacob Landry. “We take feedback from our customers seriously, and when demand is high for taproom favorites, these brews often make their way into our year-round lineup so fans can enjoy their favorites all year long.”

Urban South’s innovative R&D team will continue to expand the brewery’s offerings with over 100 unique brews for fans to enjoy in 2020. The New Orleans taproom features 21 rotating taps, 12-16 packaged beers readily available for purchase, and will feature seven year-round and three seasonal beers in its distribution footprint throughout the year.

Lime Cucumber Gose: Return of a Seasonal Favorite
Description: With roots in Germany’s legendary brewing history, Gose is a style of top-fermenting wheat beer categorized by its coriander and sea salt flavors. Urban South brings a bit of New Orleans culture to the German tradition with the addition of key lime juice and fresh pressed cucumber to this kettle soured wheat beer. The highly refreshing, thirst quenching Lime Cucumber Gose will be distributed in six packs, 1/6 barrels and 1/2 barrels between February and August.
Stats: 4% ABV, 10 IBUs
Release Date: February 2020

Urban South – HTX Grand Opening
For those who haven’t heard the news yet, Urban South Brewery will be opening a new satellite brewery and taproom in its sister city of Houston. Stay tuned for details on the grand opening of Urban South – HTX, including timing and details on the full lineup of specialty Houston-specific beers coming out of this innovative new enterprise. Follow Urban South – HTX on Facebook, Twitter and Instagram to stay up to date on the latest news and developments (@urbansouth_htx).

February 18: Collaboration with Bottleshare
Urban South Brewery is joining forces with Bottleshare, the craft beverage industry’s first nonprofit organization. Bottleshare’s mission is to serve and support brewery, winery and distillery workers who have experienced extreme hardships outside of the workplace preventing them from working and producing an income to care for themselves and their families. Beginning February 18, Bottleshare founder Christopher Glenn will collaborate with the Urban South team to brew a limited edition specialty beer to be released in early March. 100% of the profits from beer sales will benefit Bottleshare and their mission.
https://www.thebottleshare.org/

March: Urban South Brewery Turns Four
Urban South Brewery celebrates four years of brewing bold, innovative beers in New Orleans this March. The brewery was founded in 2016 with the mission to combine cultural legacy with creative new styles, making New Orleans the perfect location for the company’s first brewery and taproom. While the official anniversary date is marked on March 17, Urban South will celebrate with a public Anniversary Party on April 4.

March 27-28: Hogs for the Cause
Urban South Brewery kicks off festival season as the craft beer sponsor of Hogs for the Cause, a two-day barbecue and music festival benefiting families fighting pediatric brain cancer. A sweet, savory blend of all the things that are amazing in life (music, an incredible cause, friends and the most delicious food and beer), Hogs for the Cause is consistently voted the Best Local Charity Event in New Orleans. Urban South fans will find Lime Cucumber Gose and Holy Roller IPA on draught, and Carpe Rose and Paradise Park available in cans.
https://hogsforthecause.org/

Urban South Brewery will be hosting and participating in New Orleans events all year long. Stay up to date on new releases and everything happening by signing up for the Urban South Newsletter and following the brewery on Facebook, Twitter and Instagram. For more information, visit www.UrbanSouthBrewery.com.

About Urban South Brewery
Founded in 2016, Urban South Brewery inspires community and fellowship through the gospel of good beer. With deep roots in Louisiana, the award-winning brewery is making its mark in the beer industry. Recent accolades include: 2019 U.S. Beer Open Championships (Silver), 2019 Best of Craft Beer Awards (Bronze), 2019 Beer Army Awards (Gold and Silver), 2018 US Beer Open (Silver), 2018 Can Can Awards (Gold, Silver, Bronze) and 2018 Beer Army Awards (Gold). Urban South prides itself on being strong community partners, and – with a belief that beer is a family affair – the brewery features a family-friendly taproom. For more information, please visit www.UrbanSouthBrewery.com and follow-along on Instagram, Facebook and Twitter for all of the latest information on events and new releases.