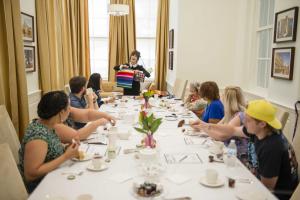 Mrs. Jill Kirsh, L.A.’s “Color Guru,” sharing her dress-for-success tips at the Scientology Information Center Tea Party on January 18th, 2020. The Information Center’s next tea party will be on March 15th, welcoming all generations. The event starts at 3pm.

CLEARWATER, FL, UNITED STATES, February 13, 2020 /EINPresswire.com/ — The Scientology Information Center will host a Springtime Community Tea Party on Sunday, March 15th. The Center is located in Downtown Clearwater at 500 Cleveland Street. The event starts at 3pm and white gloves and fancy hats are suggested. Social and community groups are welcome. There is no cost to participate.

“The tea is being held as a celebration of spring,” said Amber Skjelset, Scientology Information Center Manager. “When we think of springtime, we think of new growth. It’s a wonderful opportunity to come together as a community, learn about one another regardless of backgrounds. It will also provide an opportunity for those curious about Scientology to get their questions answered.”

The coming of spring has been celebrated for centuries. Before the 14th century, spring was called Lent in Old English (also the Catholic religious observance) which meant spring. It was the time of the year when plants started springing from the ground. After a century, the season was referred as spring time and later on shortened to ‘spring.’ In Sicily, women make a pilgrimage to the garden of Adonis at the beginning of spring.

“Tea also has a long history,” said Ms. Skjelset. “The history of tea and its origins are ancient, dating back to China nearly 5,000 years ago. According to legend, in 2732 B.C. Emperor Shen Nung discovered tea when leaves from a wild tree blew into his pot of boiling water. He was immediately interested in the pleasant scent of the resulting brew, and drank some, thus starting a custom spanning centuries.”

The tea party will take place in the Information Center’s community board room located in the century-old building replete with 30-foot ceilings and marble floors.

The Center’s lobby houses 4 audio-visual displays and many videos covering the principles and beliefs of Scientology, the life of the Founder of the Scientology religion, Mr. L. Ron Hubbard and the Church’s ongoing humanitarian programs providing assistance to the community in combatting societal issues. The Center also serves as an event venue which showcases old-time radio-styled theatre performances, piano and musical concerts including operas and Broadway-styled performances.

Seating is limited, so guests must RSVP to attend. Please contact Mrs. Amber Skjelset, Scientology Information Center at amber@cos.flag.org or
727-467-6966 to reserve your seat.

The Scientology Information Center is open daily. Hours of operation are 10am-10pm, Sun-Wed and Friday, 10am-8pm on Thurs, and 1pm-10pm on Saturday. No appointment is necessary. All are welcome.

The Scientology Information Center, located in the century-old Clearwater Building in downtown Clearwater, opened on July 11, 2015, and currently houses a gallery of audiovisual displays with some 400 videos. The Center is open to all and provides a self-guided tour showing basic Scientology beliefs, Churches around the world, ongoing social programs and the life of L. Ron Hubbard, Scientology’s founder. The Center offers tours to the broad public; holds concerts, theatrical performances and receptions for the community; and opens up the use of its conference room to social, civic and non-profit groups.