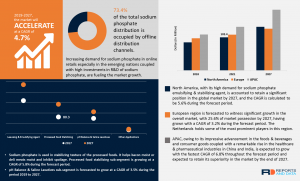 NEW YORK, NY, UNITED STATES, March 30, 2020 /EINPresswire.com/ — The Global Sodium Phosphate Market is forecast to reach USD 503.0 Million by 2027, according to a new report by Reports and Data. Sodium phosphate is an odorless hygroscopic crystalline common granular salt of sodium, chemically bonded with phosphate ions, which is manufactured by complete neutralization of phosphoric acid with a high purity sodium hydroxide and sodium carbonate and subsequent crystallization. Phosphate anions can form three different condensed forms of sodium phosphate such as di-anions, tri-anions, and tetra-anions. The global market is growing at a substantial pace due to the growing demand for sodium phosphate in food processing applications such as thickening agent, leavening agent, emulsifying agent, pH balancing stabilizer, and others. An escalation in the number of gastrointestinal (GI) diseases has actively uplifted the demand for sodium phosphate due to its wide usage in such diseases.

Click to get a SAMPLE PDF (Including Full TOC, Table & Figures) @ https://www.reportsanddata.com/sample-enquiry-form/2679

The Asia Pacific region is expected to retain its dominance in the global market. The market is North America is growing at a significant pace due to the extensive use of sodium phosphate in various industry verticals. China and India are some of the fastest-growing markets in the world, and the United States and China hold some of the most prominent players in the market.

• Sodium Phosphate injection is used as a phosphate supplement which treats or prevents hypophosphatemia low phosphorus content in blood. Also, before the colonoscopy test, this chemical is utilized in order to empty or clean the colon that is large intestines or bowel, which helps produce a clear view of the colon walls. Medical & pharmaceutical sub-segment is forecasted to get a CAGR of 5.3% throughout the period 2019 to 2027.
• Growing penetration of the online retailing businesses for the chemicals and materials, especially in the emerging nations in the Asia Pacific, is helping the market grow by broadening the outreach in the areas where the offline vendors are unavailable. Also, due to the non-involvement of distributors in the supply chain model, the profit margin is way more than that of the offline retailing sales channel. The online retailing is expected to gain a market share of 33.9% by 2027.
• For the foods & beverages such as deli meat, canned tuna, processed meat, baked foods, fast foods, and other processed food items this chemical substance has vast use in the final processing and manufacturing. Sodium phosphate is used in stabilizing texture of the processed foods. It helps bacon moist or deli meats moist and inhibit spoilage. Processed food stabilizing sub-segment is growing at a CAGR of 5.8% during the forecast period.
• European region is forecasted to witness significant growth in the overall market, with 25.6% of market possession by 2027, having grown with a CAGR of 3.2% during the forecast period. The Netherlands holds some of the most prominent players in this region.
• North America, with its high demand for sodium phosphate emulsifying & stabilizing agent, is accounted to retain a significant position in the global market by 2027, and the CAGR is calculated to be 5.6% during the forecast period.
• Key participants include PhosAgro, The Mosaic Company, Ma'aden, Agrium Inc., Hawkins Inc., EuroChem, The Potash Corporation of Saskatchewan, AksharChem, Innophos Holdings, Inc., and Israel Chemicals Ltd., among others.

For the purpose of this report, Reports and Data have segmented the global Sodium Phosphate market on the basis of distribution channel, application, end-use verticals, and region:

About Reports and Data

Reports and Data is a market research and consulting company that provides syndicated research reports, customized research reports, and consulting services. Our solutions purely focus on your purpose to locate, target and analyze consumer behavior shifts across demographics, across industries and help client’s make a smarter business decision. We offer market intelligence studies ensuring relevant and fact-based research across a multiple industries including Healthcare, Technology, Chemicals, Power, and Energy. We consistently update our research offerings to ensure our clients are aware about the latest trends existent in the market. Reports and Data has a strong base of experienced analysts from varied areas of expertise.