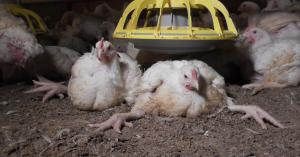 Lame chickens unable to stand due to their breeding. This image represents typical chickens used for meat and does not necessarily come from a supplier to these meal kit companies. 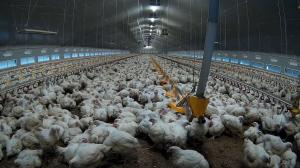 Tens of thousands of chickens packed inside farm. This image represents typical conditions of chicken farms and does not necessarily come from a supplier to these meal kit companies. 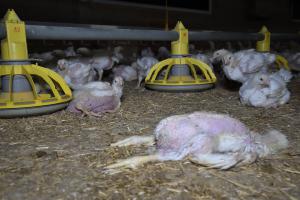 Dead chicken left to rot with the living. This image represents typical conditions of chicken farms and does not necessarily come from a supplier to these meal kit companies.

The companies, which include Gobble, Yumble, and Home Chef, have all either refused to disclose any chicken welfare policy they adhere to or have standards that do not match up with what their customers would expect.

The campaign's website, MealKitCruelty.com, showcases bloody logos and allows the public to vote for the worst meal kit company for animals. Petitions are included for each meal kit service, calling on company executives to take animal welfare seriously by making a public commitment to higher animal protection standards that would reduce the suffering of potentially millions of chickens killed for their menu items.

Animal Equality’s Campaign Manager, Dane Charbeneau, says, “It’s time for Gobble, Yumble, and Home Chef to stop hiding behind deceptive marketing claims and adopt a meaningful chicken welfare policy. By refusing to do so, we’re concerned that these companies may be misleading consumers into purchasing their meal kits when they otherwise might have sought a more humane alternative.”

With typical chicken farming:
– chickens are bred to grow at an alarmingly unnatural rate, causing leg deformities, organ failure, and heart attacks in these baby birds;
– each flock, which consists of tens of thousands of birds, are kept in dim, windowless sheds and are unable to perform natural behaviors;
– chickens are forced to live in their own waste, with ammonia levels so concentrated that many suffer from painful chemical burns;
– birds at the slaughterhouse are violently shackled upside down and then have their throats slit, often while they’re still conscious.

Over the last few years, more than 200 brands have responded to consumer concerns and made commitments to improve chicken welfare by adopting a set of standards deemed the Better Chicken Commitment. Several meal kit companies, including Blue Apron, HelloFresh, and Sun Basket, have signed on to the policy, and top restaurant chains such as Burger King, Subway, and Popeyes have done so as well. It’s time that Gobble, Yumble, and Home Chef did the same—for their customers and the animals trapped inside their supply chains.

Since more people are cooking at home during the pandemic, sales have remained strong and have continued to grow for meal kit services. That is why now is the time to compel these companies to include animal welfare as an integral part of their business strategies.

ABOUT ANIMAL EQUALITY
Animal Equality is an international organization working with society, governments, and companies to end cruelty to farmed animals. Animal Equality has offices in the United States, the United Kingdom, Germany, Italy, Spain, Mexico, Brazil, and India.