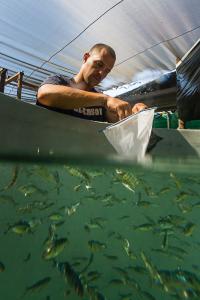 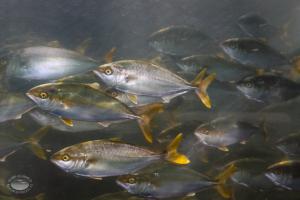 Typical aquaculture feed relies on the inclusion of fishmeal and fish oil derived from wild fish such as sardines, anchovies, and menhaden, known as “forage fish.” In 2018, roughly 18 million tons of wild forage fish were reduced to fishmeal and fish oil for use in animal feed, including pet food. Removing these fish from the ocean can decrease food available for other species in the marine food chain, such as seabirds, marine mammals such as whales, seals and dolphins and commercially important fish such as salmon, tuna and cod.

“These results show the potential for this species to be reared on fishmeal and fish-oil free diets,” said Kevin Stuart, a research scientist at HSWRI and lead author of the study. “More research needs to be done to make these diets cost effective for growers, but the potential is there to advance sustainable aquaculture.”

In HSWRI’s 64-day feeding trial, the researchers tested three diets formulated without wild fish ingredients against a control diet—containing fishmeal and fish oil—on juvenile California yellowtail. Upon completion of the study, the fish were analyzed for general body composition (moisture, protein, fiber, and ash content) and fatty acid levels in their tissue to evaluate the fish growth and fillet quality of each diet.

These results show that Veramaris® natural marine algal oil can fully replace fish oil in the diet of juvenile California yellowtail without affecting growth or survival, and at the same time provide higher levels of DHA and EPA, two essential nutrients needed for early brain development and linked to improved cardiovascular health in humans.

Although the diets free of wild fish ingredients resulted in slower fish growth than the fishmeal-fish oil control diet, the pattern of growth—600% increase in weight during the study—was still excellent and suggests a strong potential for full fishmeal-fish oil replacement for this species with continued research, said the authors.

Editor's Note: Photos along with caption/credit information are available on google drive through the following link: https://drive.google.com/drive/folders/1KgcDdOqRu86R0N8qvYQ23WBqlFa391jV?usp=sharing