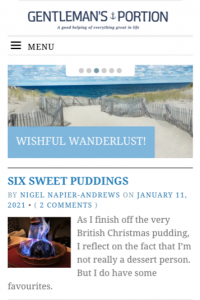 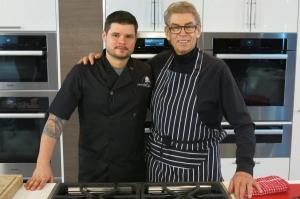 The blog’s 2021 season kicked off on January 4 with Travel Dreams, a wish list of some of the best destinations to visit post-Covid-19. It was followed on January 11 with recipes for some of the tastiest desserts on both sides of the Atlantic in a post called Six Sweet Puddings, and on January 18 with a story about the future of the cruise industry entitled When Will it be Safe to Cruise Again?

GP was created in 2012 by Nigel Napier-Andrews, an international broadcaster and writer who enjoyed a distinguished career in the United Kingdom and Canada with the BBC and CBC. He was joined as a writer at GP by David Moorcroft in 2015, and by Jim Walker in 2016. Before joining GP, David was a free-lance travel writer for daily newspapers and magazines, while Jim was and still is a wine importer and the owner of Arthur’s Cellar Wine Club.

The name of their lifestyle blog, Gentleman’s Portion, comes from a phrase used during the Victoria Era in Britain to describe a free pouring of liquor, usually Scotch or Cognac, where the server does not use a measure. It may not amount to as much as a double, but it seems generous. On GP, the phrase was extended to all lifestyle activities as noted in the blog’s motto: ‘Gentleman’s Portion–A good helping of everything great in life.’

In 2020 GP published more than 50 original stories and experienced its best year in terms of visitors and views. Some of the most popular posts over the past few years include The Mysterious Case of the Baffling Cruise Line, Sailing the Scottish Hebrides on the Ship of Queens, Last of the Great Liners, Marvellous Margaux and More, Three Whiskies Walk into a Bar, and Captivating Cap Ferret.

Nigel’s recipes have been particularly popular with visitors to the website, with more than 45,000 viewing his recipes for Eggs: Benedict, Florentine and Royale, 2,500 viewing his instructions for cooking a Downton Abbey Breakfast, and 1,900 looking at how to make Palace Finger Sandwiches. These and more than 90 other recipes have just been assembled in a new eBook called Gentleman’s Portion: The Cookbook. This is Nigel’s third cookbook and follows two other successful books called How to Eat Well and Stay Single, and Market to Table: The Cookbook.

As of January 2021, more than 450 stories and recipes had been published on Gentleman’s Portion. There is also an occasional series of videos showing how to make certain dishes, including one sharing the secrets of a good Eggs Benedict.

About GP:
Gentleman’s Portion is a weekly lifestyle blog that is dedicated to bringing ‘a good helping of everything in life’ to everyone who visits its website. Its three contributors – Nigel Napier-Andrews, David Moorcroft and Jim Walker – write mainly about travel, food, wine and whisky. GP does not carry advertising and its stories can be viewed and downloaded for free.