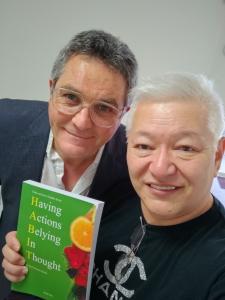 Australian Professor says more of us are becoming healthier every day all over the world as we fight Covid.

MELBOURNE, VICTORIA, AUSTRALIA, January 27, 2021 /EINPresswire.com/ — "Australia is no longer losing the battle of the bulge over other countries ", Says a very delighted and outspoken Professor Dennis Nicolle from Melbourne Australia.

“Our country was ahead in this battle for decades , but now the country that gave us fast food , is winning the title of most unfit, ” says Professor Dennis Nicolle one of Australia’s most accredited Health and Nutritionist and nine times published author of the best seller series ‘Think and Grow Healthy’.

Professor Nicolle went on to say, “The surprise when speaking to people about health and nutrition in Australia what was awfully popular was to eat more for less no matter how unhealthy it might be," said Professor Nicolle who went on to say, "No one likes being overweight or unhealthy but many wouldn’t hesitate to buy a $5 meal that is made up of a burger, fries and a coke and do the same again a few hours later." Professor Nicolle explained that Covid lock-downs, isolation and curfews in Victoria as locals experienced several waves of Covid-19 outbreaks and border closures may have increased the level of mental health issues but Aussies are battlers and have learnt to be healthier.

Professor Nicolle stated, "It's Your body, your mind, your spirit that leads you to a very poor state of health?”

A common question asked to Professor Nicolle at his University lectures is … “I don’t know why I’m overweight?” The general consensus according to Professor Nicolle to this question and similar is… “People want to be slim, but their food choices lead them to be otherwise. They want to be healthy, but their lifestyles lead them to be unfit and unwell."

After spending several hours with Professor Nicolle, I got to understand his enthusiastic focus on diet is making changes to many throughout Australia . Professor Nicolle explained ,“what fears lead you and prevent you from not changing what passes your lips is simply habit."

Simple rules to changing your lifestyle and eating habits can be found in Professor Nicolle’s latest book ‘Having Actions Belying In Thought’ available on Amazon. It has been said, that without your health all else is lost and after my interview with Professor Nicolle it was clear that he is very outspoken and won’t hold back about Australia no longer being the chubbiest country in the World. Professor Nicolle said, "habits that keep you overweight, are habits you most likely want to change. If not, you’re in trouble or there is much trouble ahead of you, regarding your health that will affect every part of your life and those who may depend on you."

Professor Nicolle is urging Australians to keep on track with the remarkable health regime most have turned to while in lock-down due to Covid-19 restrictions and urge fellow Australians to not mirror the fast food trends of what he now refers to as a plague of 'Obese Nations' and stay focused on fitness.