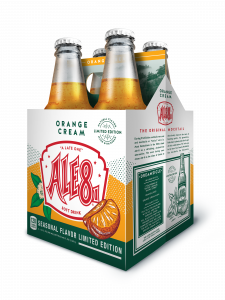 WINCHESTER , KENTUCKY, UNITED STATES, June 8, 2021 /EINPresswire.com/ — The iconic soda brand, Ale-8-One, is bringing back the summer fan favorite, Orange Cream Ale-8-One, while supplies last. This popular seasonal addition to the current Ale-8-One family of products delivers a dreamsicle inspired flavor that evokes a sweet sense of nostalgia, just in time to kick off the Brand’s 95-year anniversary this summer. Orange Cream Ale-8-One made its debut on June 7th in the Bluegrass region along with expanded footprints in, Louisville, Cincinnati, Pikeville, and most of Western Kentucky in Kroger, Walmart, and Meijer retailers.

“The tremendous positive response from our first two summer launches of Orange Cream Ale-8-One has been overwhelming. We are delighted to be able to return this summertime classic to the shelves this year. Consumers had plenty of time last summer to experiment with recipes at home; we are excited for them to share their float and cocktail creations with friends this time around.” – Chris Doyle, Marketing Director for Ale-8-One.

Orange Cream Ale-8-One will be available as a limited edition 4-pack. The small batch seasonal soda is crafted with an all-natural orange and vanilla blend combined with the Ale-8-One secret formula.

About Ale-8-One
Ale-8-One Bottling Company was founded in 1902 by G.L. Wainscott in Winchester, Kentucky, and remains the oldest, privately held bottler in the United States still owned and operated by the founding family. Ale-8-One soft drink has been bottled in green glass in Winchester since 1926. The only soft drink invented in Kentucky still in existence, Ale-8’s proprietary blend is flavored with ginger and citrus and contains less carbonation and fewer calories than conventional sodas. The company's founder and inventor, G.L. Wainscott, developed the recipe, and to this day, his great-great-nephew, Fielding Rogers, personally blends every batch of Ale-8-One. Ale-8-One is widely available in Kentucky, available nationwide online, available in Kroger stores throughout the Southeast, and can be found at most Cracker Barrel Old Country Stores and Fresh Market. For more information, visit ale8one.com and follow on Instagram, Facebook, and Twitter.