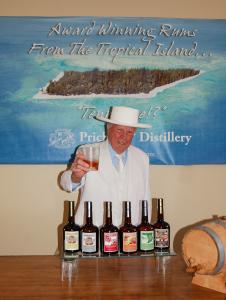 About Prichard’s American Craft Rums
• Prichard’s American Craft Rums are produced from 100% table grade molasses, just like 1776 American Rum makers in colonial America.
• Prichard’s Fine Rum is a historically accurate recreation of the colonial rums produced over 200 years ago. We use the finest water in Tennessee and premium table-grade molasses to create our rum, which is then aged at least four (4) years in hand-made charred white oak casks. These barrels, provide the rich, full-body flavor that is our famous Fine Rum. Prichard’s Fine Aged is a great sipping rum.
• Prichard’s Crystal Rum is made with the finest grade “A” molasses. Even if you are not accustomed to drinking rum straight, you may find Prichard’s Crystal Rum to be quite refreshing. The clean, smooth finish makes Prichard’s Crystal Rum a perfect spirit for today’s artisan cocktails.
• Prichard’s Cranberry, Peach Mango, and Key Lime Rums are naturally flavored bringing innovation and new flavors to the category.
• Prichard’s Spiced Rum. A Traditional New England styled spiced rum. Very much at home in a mug of hot apple cider or the favorite, Hot Buttered Rum, early market sampling has generated considerable interest in this tasty, spiced rum with a suggestion of cinnamon, nutmeg, and just a hint of vanilla.

You will find the Prichard’s name on all of his spirits. Following the motto of his father, Don’t produce or sell anything you would not put your name on the label. Phil believes the Prichard’s Name is his standard of quality.