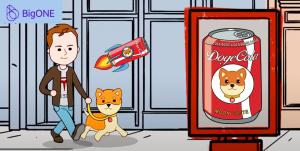 “It’s really exciting to be listing such a creative meme coin, and not just simply as it has real utility as a soft drink beverage, but due to its ‘reflective’ token functionality,” said BigONE Exchange Chairman Anndy Lian.

“We kicked off the listing with an outreach program to bring in more users, as we want as many people as possible in our global community to enjoy investing with DogeCola!” he added.

The auto-boost function buys back and burns variable amounts of tokens every time there’s a sale made with DogeCola. More powerful than a standard buyback token, it's built to make buybacks and burn tokens by adjusting for volume, to keep the price high.

Another powerful feature to benefit both new and experienced investors is the feature to discourage selling and whaling, as the commission is higher on sales, so holders will be rewarded more.

Chris, the lead dev and founder of DogeCola, which first launched in late July, said: “I am the founder and the lead dev of the project. I have 10 years of experience in IT, as well as several projects in crypto.

“I love DogeCola, it is something unique, technically amazing, auto-boost and tokenomics are great and the idea to put a soft drink with Doge on the market could make our project very famous. If you like Coca-Cola, if you like Dogecoin, then you will love DogeCola.” The founder confirmed plans to build a strong community of passionate investors and consumers around DogeCola, around the novel meme token and soft drink.

Following registration of the trademark DogeCola the first order for the drink has been placed, allowing token holders to now request samples of the fizzy drink. The aim is to have the ‘MoonTaste’ soft drink in the hands of consumers by the festive season in December.

To help reduce plastic pollution caused by corporations like Coca Cola, DogeCola will be launching a community-led vote, to decide which eco-charities to donate to, along with partnerships with charities worldwide.

BigONE is a global cryptocurrency exchange that provides a platform for trading various cryptocurrencies. It was founded in 2017 and registered in the Netherlands. The group operates in Russia, Brazil, Vietnam, Seychelles, Singapore, Japan, and Indonesia, providing marketing, investment, and blockchain technology research & development. As it stands, there are over a thousand users from Latin America registered with BigONE.

DogeCola is the first reflection token and soft drink at the same time. Every buy gives members more with the auto-boost and hyper deflation system in place. We want to build a strong community, distribute our drink to be sold and growing our brand in the crypto and real world.