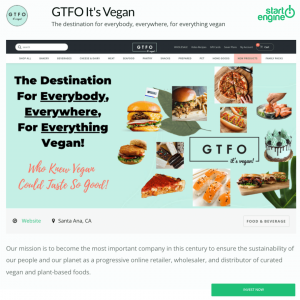 In Less Than 12 Hours, The Campaign Has Already Seen Significant Traction

This campaign will play a critical role in our mission to become one the of the most important companies in this century to ensure the sustainability of our people and our planet!”
— Tanya Pierce

GTFO It’s Vegan is excited to announce the launch of its crowdfunding campaign on StartEngine.Com. StartEngine, which has raised over $400 million among 500k investors for start-up companies, has become the go-to-site for investing in the future of equity fundraising.

Tanya Pierce, President of GTFO It’s Vegan states, “Our campaign just went live and we have already seen significant traction! We are so grateful for all of the support we have received in helping us realize our vision.”

Marc Pierce, GTFO’s Co-Founder and CEO states, “It's been an amazing 16 months since we first launched on May 15th 2020. In just this short period of time, we have achieved $3.7M in sales and fulfilled nearly 30k orders. And we're just getting started.”

Equity crowdfunding presents a very unique opportunity for individual everyday investors to get in early on business ideas that they want to support both socially and financially, while helping the entrepreneurs realize their vision. Think of it as a start-up IPO for the everyday investor.

With the crowdfunding raise, GTFO It’s Vegan plans to open additional fulfillment centers across the country to help lower shipping costs, introduce new GTFO It’s Vegan branded plant-based products, and launch a line of home compostable packaging for use among all its vendors to significantly reduce the carbon footprint of vegan products sold domestically and internationally.

The introduction of GTFO It’s Vegan private label plant-based products is already well underway, using the brand name GREATFOODS, It's Vegan. GTFO launched a line of fresh and take-n-bake vegan bakery products in September. And later this month, GTFO will launch of its own vegan sashimi line, including vegan tuna, salmon, sailfish and calamari sashimi.

Marc Pierce states, “The vegan seafood market is the fastest growing category in the market.” This is based on GTFO’s own proprietary purchase data. Says Pierce, “By mining our data, coupled with our own proprietary consumer market research, we have developed the best and most comprehensive information on consumer trends in plant-based purchases than any other source.” GTFO will be the first company in the U.S. to offer the most extensive line of vegan sashimi than any other destination.

Tanya Pierce states, “this campaign will play a critical role in our mission to become one the of the most important companies in this century to ensure the sustainability of our people and our planet!” To learn more about this crowdfunding campaign, visit the GTFO It's Vegan StartEngine Campaign Page or go to https://www.startengine.com/gtfo-its-vegan.