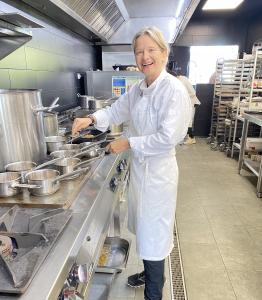 Olympian in a kitchen

Olympian in a Kitchen by Nicola Fairbrother

Fairbrother has launched a newsletter called Olympian in a Kitchen with weekly episodes about life in a professional kitchen.

How to find out more?

Fairbrother has launched a newsletter called Olympian in a Kitchen with weekly episodes about life in a professional kitchen.

Find out how an Olympian survives (or doesn’t) when thrown into a completely different high pressurised environment by following the journey.

Who is Nicola Fairbrother?

Most people will know Nicola Fairbrother – not as a chef – but as a judo Olympian. In 1992 she won the Olympic silver medal at the Barcelona Olympic Games. She is also a judo world champion and three-time European Champion. In 1994, HM The Queen honoured her with an MBE for services to judo.

Recently she retrained as a professional chef completing the nine-month professional diploma course at Leiths Food and School of Wine in London.

Fairbrother changes her judo suit for chef whites for this mammoth task.

The 51 year old will be working for 100 days in fast-paced, Michelin starred Spanish restaurants. The journey has already begun.

“I’m back in whites. But not a judogi this time. Nope. This is something brand new for me. And for it, I’m in chef whites,” says Fairbrother.

“I’ve now completed three stages in three very different kitchens in Spain. Each kitchen you go into is completely different, each chef adds their own personal stamp of recipes, and work ethics,” says Fairbrother.

Working with some of the best chefs in the world

What is the Olympian in a Kitchen newsletter?

Fairbrother, who has written for The Sunday Times, The Guardian, The Independent and The Times, and commentated for the BBC at three Olympic Games has recently launched a free newsletter called Olympian in a Kitchen.

The newsletter contains a mix of personal stories from the Olympian, along with healthy recipes and tips on culinary skills.

Read about the Olympian's first day in a professional kitchen.

See how to make this healthy Langoustine and Mango dish.

Why is an Olympian venturing into a Kitchen?

Fairbrother says there are lots of similarities between being a sportswoman and being a chef.

“The daily grind. Sacrifice. Routine. The search for self-improvement. Focus. Drive. Creativity. Technique. Not to mention the adrenaline rush.”

“No matter if you are plating up for service, delivering a soufflé to order, or preparing for an Olympic final, the adrenaline rushing through your veins feels very much the same.”

“I’ve been searching for some years to find something to replace the buzz of being an Olympic judo athlete. Who would have thought that I would find it by working in a kitchen?”