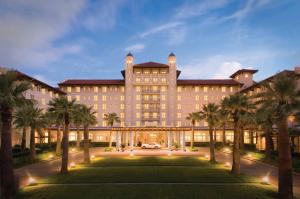 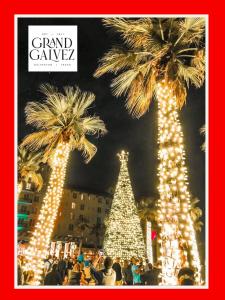 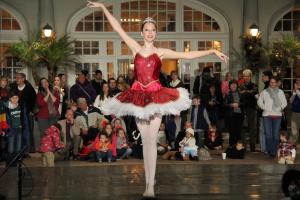 Our staff has been receiving calls for months about the event. We are committed that Grand Galvez remains an important part of the Galveston Island holiday weekend this year and in the future.”
— Mark Wyant, owner, Grand Galvez

The Galveston Holiday Lighting Celebration begins with the arrival of Santa Claus, the beloved, legendary Christmas figure dressed in a red coat, pants and hat trimmed with white fur. His arrival is followed by the lighting of the hotel’s 35-foot Christmas tree, decorated with thousands of lights.

This annual holiday was founded in 2008, by the hotel’s previous owners, George Mitchell and his family, as a way to bring the community together following the devastation of Hurricane Ike. It is one of more than 50 holiday events on Galveston Island.

Following the tree lighting, Galveston Ballet, under the direction of Janel Amsallem, will perform a medley of variations from the ballet, “The Nutcracker,” along with other ballet favorites. New this year is the addition of the Galveston Symphony Brass Ensemble, under the direction of Sparky Koerner, performing holiday classics such as “Jingle Bells,” “Deck the Halls,” and “We Wish You a Merry Christmas.” KHOU-TV’s Mia Gradney will be the mistress of ceremonies for the event.

Throughout the evening festivities, Grand Galvez staff will collect monetary donations for The Salvation Army of Galveston County.

“We are honored to continue this holiday tradition at Grand Galvez,” says Mark Wyant, owner, Grand Galvez. “Our staff has been receiving calls for months about the event. We are committed that Grand Galvez remains an important part of the Galveston Island holiday weekend this year and in the future.”

The Grand Galvez, a 224-room resort hotel and spa is a historic landmark property in Galveston, TX, situated on the island’s famed Seawall facing the Gulf of Mexico. Grand Galvez will be part of the Marriott Autograph Collection and has pleased guests worldwide for more than 100 years. The AAA 4-Diamond property is the only historic beachfront hotel on the Texas Gulf Coast and renowned as the Queen of the Gulf, one of the finest Galveston hotels on the beach. Over the century it has been open, the Grand Galvez has hosted U.S. Presidents, beauty pageant contestants, gamblers, movie stars and celebrities from around the world.

Hotelier Mark Wyant, owner, Seawall Hospitality LLC, purchased the property from the heirs of Galveston Island-born oilman and developer George P. Mitchell in March 2021. Mr. Wyant, along with his wife, Lorenda Wyant, has instituted extensive renovations, which will embody the hotel’s beautiful architectural design while, at the same time, introduce an upgraded luxury and energy.

A native of Dallas, Texas, Mr. Wyant is an established hotel owner and developer in Texas, Florida, Louisiana and South Carolina. The purchase of the Hotel Galvez, now the Grand Galvez, will mark the third property Wyant has developed in Galveston. In 1999, he built the Holiday Inn Express at 1st and Seawall and then sold it in 2005. In 2004, he developed the Holiday Inn Sunspree Resort, where the noted Capt. Jack’s once stood. In 2014, he sold it and went on to create The Saint Hotel brand with award-winning properties in New Orleans, Key West and Charleston. He recently sold The Saint New Orleans and is finalizing construction on The Saint Hotel Charleston.

A history lover, Wyant strategically selects development properties that are in key US cities known for their history and excellent leisure, business and entertainment experiences. In every location, his primary goal is to embody and respect the legacy, charm and history of the city.